Copper and the copper alloys are some of the most versatile materials available and are used for applications in every type of industry with world consumption of exceeding 14 million tonnes per annum.

Besides good conductivity the properties include strength, hardness, ductility, resistance to corrosion, wear and shock, low magnetic permeability, an attractive range of colors together with ease of machining, forming, polishing and plating. Over the years a number of materials have been developed giving combinations of these properties that are optimum for a very wide variety of applications.

Copper is a reddish-colored metal, with a high electrical and thermal conductivity (silver is the only pure metal to have a higher electrical conductivity at room temperature). Pure copper's melting point is 1,981ºF (1,083ºC). 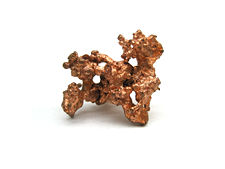 Copper is metallic resource that is found throughout the world with the United States being a major supplier along with Canada, Chile, Peru and Zambia. Copper, when it was first mined was anywhere from 35-88% pure. Such ores are now collector's items at gem and mineral shows. Today, copper is produced from ore containing less than 1% copper (per ton of ore rock).

Some Copper-containing minerals are:

Click on this link to see more Copper-containing minerals.

One of the ways of extracting metallic ions from ore is first to get that ion dissolved in a water solution (such as gold in cyanide solution) and then by placing that solution in contact with a metal or material that is more reactive than the metal ion in solution. In this way, the more reactive metal goes into solution and the dissolved metal ion precipitates out of solution. The reactivity of metals has been known for some time and is used in the hydrometallurgy process.

As we saw at the beginning of this article, copper is Atomic Number 29, that is, an atom of copper has 29 protons. The Atomic Weight is 63.54. The Atomic Symbol is Cu.

Copper is in column IB of the Periodic Table of the Elements, above Silver (Ag) and Gold (Au). Elements in the same column have some similar properties. Like silver and gold, copper is soft (with a Moh's hardness of 2.5 to 3, that is, harder than a fingernail, but softer than a steel pocketknife). The surface has a metallic luster. With a specific gravity of 8.2 (based on the density of 8.2 grams per cubic centimeters, g/cm3), it is far denser than water with a specific gravity of 1, or sulfur, with a specific gravity of just over 2, or carbon in the mineral graphite (2.23). Silver, however, is below copper in column IB, and so it is denser (10.5) and gold, even lower, is far denser at 19.

When Copper combines with other elements, it has a charge of either +1 (called "cuprous") or +2 (called "cupric").

Like gold and silver, copper is malleable. That is, it can be bent and shaped without cracking, when either hot or cold. It can be rolled into sheets as thin as 1/500 of an inch.

Copper also is ductile, that is, it can be drawn out into thin wire. A copper bar 4 inches thick can be heated, rolled, then drawn into a round wire so thin that it is thinner than a human hair. This wire is 20 million times longer than the original bar! 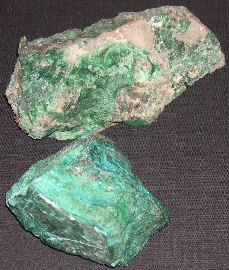 Industry valued copper for these properties. Copper is second only to silver in its ability to conduct electricity, but silver is too expensive for this sort of use. Bronze and brass, however, do not conduct electricity as well as pure copper.

Besides electricity, copper also is an excellent conductor of heat, making it an important metal in cookware, refrigerators, and radiators.

Copper is resistant to corrosion, that is, it will not rust. If the air around it often is damp, it will change from its usual reddish orange color to reddish-brown. Eventually, it is coated with a green film called a "patina" that stops all further corrosion.

There are three basic ways of treating metallic ores in order to extract their metal content. Pyrometallurgy is the treatment of metals and their ores by heat. Pyrometallurgy includes Roasting, which is the heating of ores in air or heating it with a reducing agent such as carbon (coke) or carbon monoxide. Pyrometallurgy is the oldest extractive process. In early day Nevada, carbon was obtained from pinyon pines, juniper trees or sagebrush. The wood was collected and heated in ovens which resembled beehives and these ovens became the "Beehive Ovens" found today near numerous old mining camps. 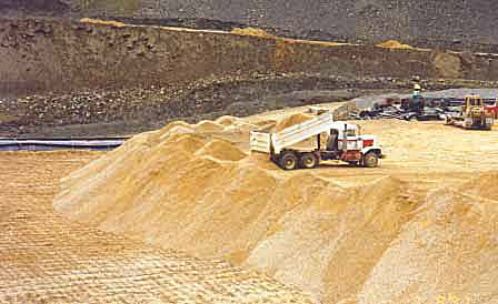 The second basic way of treating metallic ore is electrometallurgy. In this method the metals are processed using electricity such as electroplating and electrorefining. Electric arc furnaces are used to make steel. Electrometallurgy is used when very high purity metal is needed.

The third basic way of treating metallic ore is hydrometallurgy. This is a wet process as the name implies, where reactants are used in a water solution. This method has not been used on an industrial scale due to the high costs involved. However, as the concentration of desired metal becomes less in the ores mined, the wet processing of the more valuable metal ores becomes more feasible.

Most modern copper mining is done in open pits with explosives, giant shovels, and huge trucks to haul the ore to a mill or smelter.

The method of extracting copper from ore rock has been improved with modern technology, but the ideas behind it developed directly from past experience. Since every ore is at least a little different from every other ore, the exact process varies with the type of ore. Sometimes the copper ore mineral is different; for example, chalcocite (copper sulfide) is very different from malachite (copper carbonate with water). The non-copper minerals in the ore, called gangue, vary as well. 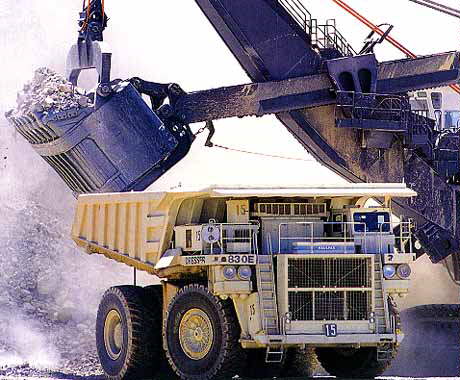 Copper Ore being loaded into a 300 ton truck for transport to the crusher. 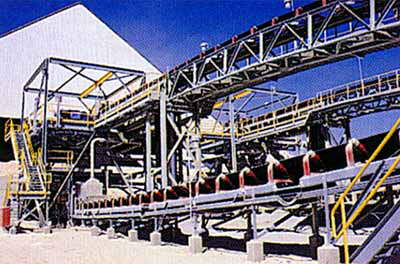 The primary crusher at a copper mine. The truck dumps ore into the crusher which crushes the ore. Screens size and distribute the classified ore to a series of conveyors, like those above, for transportation to the mill for further processing.

early history of copper mining and use

The use of copper and gold marked the transition from the Stone Age to a more modern way of life. Ancient civilizations could use copper because it is found in its native state on the surface of the ground, because it has a distinctive color, and because it is easily worked.

In addition to the important copper deposits of Cyprus, copper is relatively common around the Mediterranean. It was found in nuggets and masses on the surface of the earth, adjacent to streams, in the walls of canyons. Although exposure to weather changes copper's reddish color to blue-green, it is easy to recognize. Ancient people learned that copper could be shaped by pressure, that is, it is "malleable."

Objects of beaten copper were used by the Chaldeans in the Middle East about 4500 B.C. Copper weapons and ornaments from about the same time have been found in the ruins of Susa, an ancient civilization located in the area of the nation that is now Iran. Native Americans exploited copper in the Upper Peninsula in Michigan perhaps 7000 years ago.

We have no way to know for certain how copper was discovered long ago. We know that humans already recognized gold. Maybe they were looking for other substances like gold. Maybe somebody dropped a piece of rock on some copper, and dented the copper without breaking it. Then, this clever ancient inventor might have realized that pure copper could be hammered into a useful or pretty shape. This special property of copper is called malleability.

Later, another observant person, maybe a potter, accidentally dropped a piece of copper in a fire. This early metal worker learned that the copper became less brittle and easier to shape if hammered after heating. This process is known as tempering.

Discovery of the idea of working copper also occurred in a number of cultures around the Earth. Thanks to the excellent archeological record in the arid southwest of Asia we know that ancient civilizations of Mesopotamia, especially the city-states of Sumeria, were among the earliest to invent the use of copper and gold. This area is now in the nation of Iraq.

In our offer we have:

Click on the links above to see more product details.